I have had my storefront studio in Kingston, Ontario, for the past 21 years, and during this time I was often asked to make cremation urns, but usually only had a couple in stock. About a year ago I decided that it might be nice to offer my burial urns to a larger audience and developed the idea for Kingston Urns. Each one is handmade out of porcelain, using my potter's wheel to throw each urn and lid individually with a focus on clean lines and a generous form. I then glaze my urns in multiple crystalline glazes and fire them to 2350 degrees Fahrenheit in my electric kilns. Each one has its own character and shape, and the crystal formations in the glaze ensure that each cremation urn is completely unique. 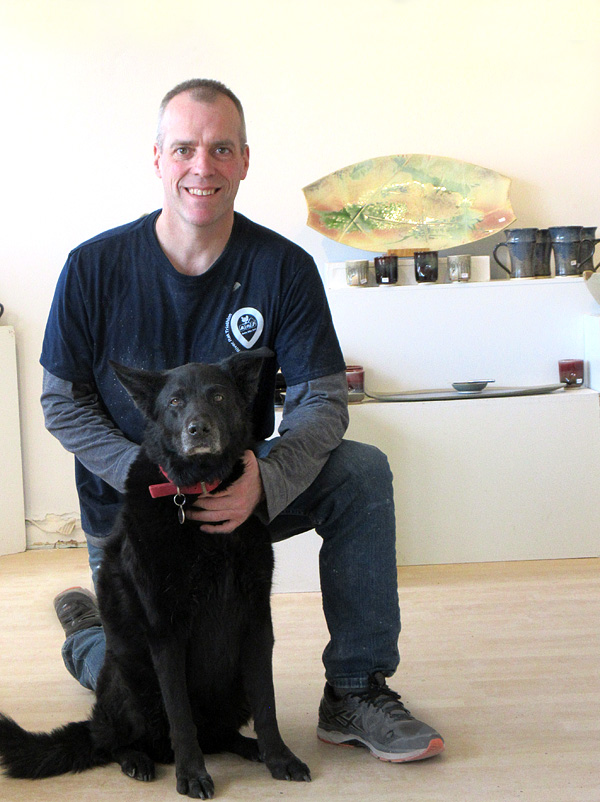 I first became interested in pottery after taking a class at the Kingston Potter's Guild in 1990 while studying at Queen's (Philosophy). After several years as a dedicated hobby potter I decided to pursue a full time career in clay and realized that some formal training would be good. I then attended the Emily Carr Institute and Design in Vancouver from 1995-1998. After graduating with a BFA and Diploma in Studio Ceramics, I returned to Kingston, Ontario, to establish my studio. I spent the first year hunkered down in my parents' basement, tracking down used equipment and establishing relationships with galleries to carry my work. In 1999, I officially opened Black Dog Pottery in a small storefront on Montreal Street. The next year I moved to my current location in Kingston, Ontario.

The bulk of my work is porcelain which is fired to Cone 10 (2350 F) in my electric kiln. I do a large amount of glaze testing and tweaking, and am particularly interested in developing a depth and variety of colour in my work by overspraying multiple glazes. I have taken several workshops over the years with some of my favorite potters including Tom Coleman (2008), Steven Hill (2010) and Randy Johnston (2017) and and recently finished two online glaze materials courses with Matthew Katz to further my knowledge of glaze chemistry.  In 2022 I am looking forward to a mold making workshop and a one year mentorship program through the Kingston Potters Guild with Angelo DiPetta. I find these workshops extremely beneficial, and ideas and techniques that were presented have strongly influenced my most recent work. I have been distorting the shapes, slowly getting braver with my colours and surface decoration, and am keen to see where this all takes me.

No items in cart
View Cart